The Foundation is a privately funded charity. Its income is sourced from its investments and properties which include Airview Building and 96 Club Street. 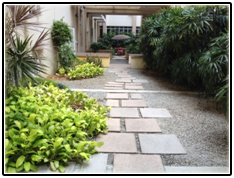 Airview Building, co-owned by Yangzheng Foundation (formerly Yeung Ching Foundation) and Kwong Wai Shiu Hospital (KWSH), is a building with rich heritage. It was built in year 1924 to fund the expenses of KWSH and Yeung Ching School.

The Airview Building was initially leased out to New Asia Hotel. The Hotel, owned by Cantonese businessmen, was one of the most well-known hotels during the period. Situated on the roof top of the building was a reputable Cantonese restaurant where many wedding banquets for the wealthy were held.

However, in the 1970s, several luxurious hotels emerged and the facilities of New Asia Hotel paled in comparison.

In year 1974, the hotel ceased its business and the building was refurbished into a commercial building for letting.